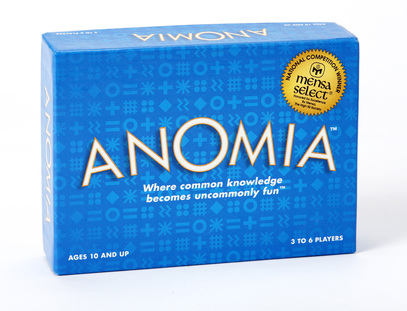 If you like Blurt, matching symbols on cards, and fast-paced word-association...

Players flip up cards from the two large decks to reveal one of a 168 categories and a symbol. When any two players reveal a matching symbol, the two race to be the first to shout out a word in their opponents category. It's surprising how hard it is to think of a Bird, a River, or an Olympic Sport when you're under pressure to be first. Wild cards add to the frenzy of this MENSA award-winning game, sure to liven up any gathering in seconds.

(There is also a "Party Edition" available with more cards and more fun!)

If you like Apples-to-Apples but want a funny theme for kids of all ages...

Designed by Ken Gruhl and Quentin Weir, Published by RnR Games
For 3 to 10 Players, ages 8 and up. Plays in about a half hour.

Wacky combinations of creatures both real and fictional are pitted against each other in this quick, light card game for the family. Once the players choose the creature from their hand that they think will be chosen as the winner, they play crazy adjectives on the creatures to handicap them. The dragon may not be so effective when near-sighted, or coated in butter! The chipmonk might emerge victorious if it's radioactive and armed with a laser gun! Add in special goals for even more fun, and everyone will be laughing from the first round to the last.

If you search the BoardGameGeek.com database for "star trek", you'll discover over 120 separate records in there. That's a deceiving total because many of those are expansions and promos and modules. Filtering out all those not-a-complete-game listings, there are still 45 games in the results. Yeah - trek is a phenomenon.

Just so you know, I've been a Trekkie since 1966, and I have a pretty substantial collection of ST toys and memorabilia, so I'm a little bit interested in this topic. I don't have the all 45 games listed in the BGG database, but I do have more than half of them. Based on my experience, what are the "best" Star Trek games and what makes them best?

(BTW - I'm not counting Star Trek Uno or Star Trek Scrabble or any of the Star Trek Monopolies. But yes, I own them all.)

My favorite game on the list, the subject of fond memories playing this with my kids - and now with my grandkids. It's a simple little adventure game with a pretty good amount of theme. There's a little chance in the set-up, and the old roll-and-move to deal with. But there are choices, and enough challenge to keep it interesting. This has been out of print for decades, but definitely worth it if you can track down a copy on line or at a garage sale.

This, too, was a favorite with my son and I when he was a mere sprite. Building our fleet decks and flying those missions. Away teams and diplomacy, familiar worlds and races - all the flavor and adventure one could want. In contrast to later refinements of this type of game, it might be a little flawed - but my collection is dogeared and well scuffed.

Having been a fan of the original Catan, when this was announced I was plenty of excited. It took a while to get to my game table, but now that I've played it, I am very pleased. They did a fine job of reinterpreting the Catan game play to the Star Trek universe, making the game fun in a whole new way. Some of the quirks are a little contrived, but still - it's #3 in my list.

The inevitable implementation of deck building into the franchise, the fun of playing familiar characters and tech is there. The scenarios, though, due to the randomness in the game play, weakens the theme and pits players against each other when the characters they play would never be involved in such a confrontation. Fun to toy with the old cast.

This is the TNG implementation of the same deck-building system. For me, not quite as much fun (being a TOS fan), but still - its a Star Trek experience. There's another box available, too - with the Borg and more. Including that in this list would be redundant.

This is quite a different game, combining some fairly shallow strategy with a heavy dose of trivia in here to pull some flavor into the game. If you don't know your ST canon, you'll fail miserably at this game.

WHAT? A “VCR Game”? Yes it's extremely cliché and lots of role-and-move randomness. But the “dulcet tones” of Gowron growling “Experience Bij!” is hard to top. Racing around the Enterprise with little paper standees is so lame - but so much fun. On the other hand, if you don't already have a VCR, it's probably not worth buying one.

Each player in this game has a navigation board upon which they pilot their own starships. Again, there's a heavy trivia ingredient in the game play, but it's a very unique “user interface” for the genre. A little too much randomness spoils it after the charm has worn off.

Yes, it's a trivia game, and molded after the classic Trivial Pursuit model. These cards can be used nicely with the old T.P. board and bits if you like, but we died-in-the-wool Trekkies just whip out the cards and ask the questions. There are others - but this one just seems to have a charm about it.

I had to include a tenth game here, and just couldn't bring myself to adding in one of the half dozen roll-and-move games from the olden days. This game at least has some flavor to it, and some challenge, though games of this kind have come a long way since this one was published.

In an attempt to expand on their Star Trek card game series, Decipher came up with this stand-alone-but-patially-compatible game. Lots of cards make up an impressive collection, but not much of a game. Still, it's playable and themeatic, breaks the ice at parties (of Trekkies).