Mini-Review — "Kingdom of Solomon" Board Game 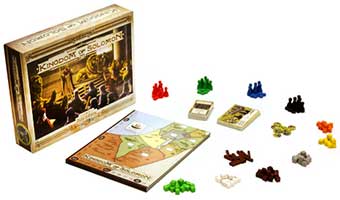 If you like Monopoly, Acquire, Bazaar, buying/selling, strategic decisions and building up an empire...

Designed by Phillip DuBarry, published by Minion Games with artwork by Clay Gardnerand Ricky Hunter.
For 2 to 4 players ages 12 and up, and plays in about an hour.

This is a game of worker-placement and resource management in which each player collects items from the provinces of Solomon's Kingdom, manipulating the markets, controlling the priests, then building the temple and other buildings throughout the kingdom. There are many paths to victory in this game, and though it looks a bit intimidating at first, a few plays will reveal the many strategies that a player can choose from. A little more complex than Monopoly, and much faster than Risk, folks familiar with those two games should enjoy Kingdom of Solomon. 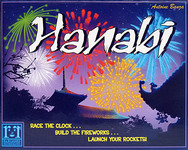 If you like cooperative games, giving clues, and rummy-style card games...

Designed by Antoine Bauza, published in many editions, most recenty by RnR Games with artwork by Gérald Guerlais and Albertine Ralenti.
For 2 to 5 players (can be played with more) ages 8 and up. Plays in about 30 minutes.

The theme has something to do with fireworks (the name is “fireworks” in Japanese), but this is really a set-building game in which all players are working together to score as high as possible in a given number of rounds. Ah, but here's the catch: The players are holding their hands of cards BACKWARDS and must give simple clues to each other about the cards they can see (value and color only, please). This is a challenge worthy of a good party game, and players who play often will begin to develop a finesse for giving clues that will raise the group score from “horrible” to “legendary.” 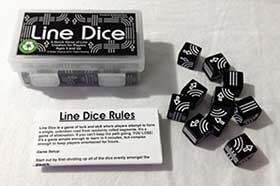 If you like Dominos, Dice, making patterns and simple puzzles...

Designed by Walter Sharrow and pubished by World Wide Chaos, Inc.
For 2 to 4 players ages 5 and up. Plays under 10 minutes.

This set of 36 custom dice is imprinted with lines on each face, and a few directional arrows. From a “hand” of dice the players attempt to build upon a continuing path of curves and straight sections one die at a time. All dice are visible, so players can see their opponent's choices as well as their own. The objective is to be the last who can play a die to the path. Clever placement can block other players, and the thousands of combinations guarantee a different game every time. A great little "Pocket Game" for travels and outings and fun on the go.

If you like fun card games with a sense of humor, cards-with-words and collecting points to win...

Designed by Paul Peterson, published by several companies including Hasbro, with wonderful art by Quinton Hoover and Mike Raabe.
For 2 to 5 players ages 10 and up. Plays in about 30 minutes.

The theme of this game is a little grotesque, but the light-hearted illustrations and spirited game ply make it a family favorite. Collecting the heads of the French aristocracy, each worth points, the game is played in three rounds (three "days"). The play of action cards, carefully timed, can improve your score and hinder the other players. A fast and clever card game, fun for just about any occasion (if you're not disturbed by the theme). Highy recommended!

If you like the Steam Punk theme, traditional card games, and a little bit of story...

Ruse —
Designed by Levi Mote and Sara Sharp, Published by Bonsai Entertainment / Game Salute, with artwork by Kelly McClellan.
For 3 to 5 players ages 10 and up. Plays in about 30 minutes.

Subtitled as “a steampunk murder mystery card game,” accusations and alibis are flung right and left as players attempt to implicate each other in a dastardly murder. The various characters in the game will be embroiled in a convoluted story of intrigue. The game is designed around a standard 52-card poker deck (in fact the cards have traditional card ranks on them). The game also includes a bonus dice game and a small story book. The box is many times larger than it needs to be to store the two decks of cards, but the quality of the components is good. Ruse will be different every time, and if the players are story-minded, the adventures can weave a fun tale while they defend themselves and accuse others turn after turn.