Mini-Review — "King of Tokyo" Board Game 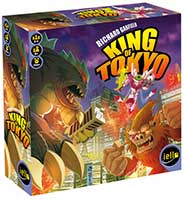 If you like Godzilla and King Kong, Yatzee and Shut-the-box, fighting monsters and super-powers...

Designed by Richard Garfield, published by iello Games with artwork by Benjamin Raynal.
For 2 to 6 players ages 8 and up. Plays in about 30 minutes.

This game is great for anyone who can read a little seeking some adventure, competition, and a large dose of dice rolling. Fun and fast-paced, the game is very easy to learn, and gets more fun the more you play it. All the giant monsters vying for control of Tokyo start out with the same abilities, but players can purchase cards that allow them special powers, and sometimes to break the rules. Should you try for the points to win, or attack the other players and be the last one standing? If your strategy doesn't work, no worries - it's a quick game, and you can play again in a few minutes.

(Expansion sets are avialable to add more players, more powers, and more challenges to the game.)