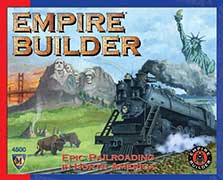 If you like Ticket to Ride, Monopoly, buying and selling and building an empire...

Designed by Darwin Bromley and Bill Fawcett, published by Mayfair Games, with artwork by various artists (depending on the version).
For 2 to 6 players ages 12 and up. Plays in about 2 hours.

The most popular of the “crayon rails” games, each player is the owner of a railroad company. Spending money to build railroad tracks, you connect cities which produce certain goods with other cities which want to purchase those goods. You literally use a crayon to draw the tracks on the map. Delivering goods that make you the most money is the key, and you can upgradey your locomotive to go faster or carry more goods on each trip. An excellent introduction to the “pick-up-and-deliver” style game without a lot of bookkeeping.