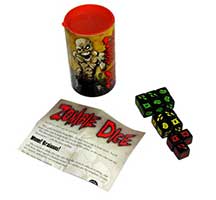 If you like Yatzee, Zombies, and taking chances with hands full of dice...

Designed by Steve Jackson, published by Setve Jackson Games (among others) with artwork by Alex Fernandez.
For "2 to 99" players (best with less than 8) ages 10 and up (or younger). Plays in 10 minutes or more, depending on the number of players.

Zombies eat brains, and the players are Zombies attempting to do just that. This game comes with 13 custom dice, each face depicting either brains (which score points), footprints (the humans that got away), or shotgun blasts (not good). Rolling and re-rolling the dice will gain points, but if a player should roll three shotgun blasts, all the accumulated points are lost. This simple push-your-luck game has some clever quirks to it, including different combinations of pictures on the various dice. Can you get 13 brains before the other Zombies?

(Two expansion sts are available to add more challenges and variety to the game as well.)