The "Won-on-Won" comparison series looks at games you may know (e.g. "Checkers") and games you may not know (e.g. "Alquerques") and talks about what's similar and what's distinctive about each. Sometimes these might just be a variation on a theme, but other games may provide a similar play experience through very different means. Here's our first installment in this series:

In the Americas, it's called “checkers” and played on a “chequered” board of 8x8 squares. Each player has 12 large discs that fit nicely on the squares, set up on the first three rows of dark squares on their own side of the board. The game is played entirely on the dark squares, all moves being on the diagonal. The objective: to “capture” all of the other player's discs by jumping them with one's own onto a square immediately beyond them, also on the diagonal, one at a time. It is thought that draughts is an adaptation of Alquerques to utilize a chessboard and simple playing pieces. 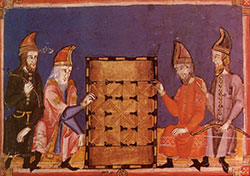 Alquerqes is a medieval Latinized derivation from the moorish “El Quirkat.” The rules are included in Libro de los juegos ("Book of games") commissioned by Alfonso X of Castile in the 13th century. This game is considered to be the ancestor of draughts/checkers. The board is an array of 25 points and an underlying pattern of lines, orthogonal and diagonal, which indicate which moves are allowed. Each player's 12 pieces can move one point at a time following those lines. The objective: to “capture” all of the other player's pieces by jumping them with one's own onto a point immediately beyond them - one at a time.

Although these two games share many similarities, from moves to jumps to the number of pieces and the common objective. However, the very different boards make the strategies and tactics of the games very different. Alquerques tends to be a faster game, due primarily to the smaller board, which is often quite desirable. Checkers is ubiquitous in the English-speaking world, and variations are found throughout Europe and beyond. Alquerques is fairly rare, but every bit as much fun and easy to learn. The two are comparable, but not interchangeable.